Conway's Game of Life in python

In this short post, I explain how to implement Conway’s Game of Life in python, using numpy arrays and matplotlib animations. I emphasise intuitive code than performance, so it could be a useful starting point for somebody to understand the logic before implementing a more efficient version.

A cellular automaton (pl. automata) consists of a grid of cells; each cell has a state — either alive or dead. I will refer to this grid as the universe, though this is non-standard terminology. The automaton then iterates forward in time, with the new state of each cell being decided by a set of rules.

One of the most widely-studied cellular automata is the Game of Life, sometimes just called ‘Life’, which was discovered (or ‘invented’ if you prefer) by John Conway. It is so named because its rules can be interpreted as a very simplistic model of living cells.

Firstly, let us define the the eight grid squares around a cell as its neighbours. The rules of Life are then as follows:

1. A living cell will survive into the next generation by default, unless:

2. A dead cell will spring to life if it has exactly three live neighbours (reproduction).

Clearly, no cells can come to life unless there are already some living cells in the universe (Aquinas’ primum movens?). Thus, we have to provide the universe with a seed, i.e a set of initial living cells. The massive variety and complexity of the results, often starting from simple seeds, is what makes cellular automata so interesting.

This is a rough overview of our plan of attack:

I am using numpy arrays to represent the universe, as they are easy to initialise and manipulate. Let us start with a small universe consisting of a six-by-six grid. In our universe, each cell will either be a 1 (alive) or 0 (dead). For now, they are all dead, so we initialise with np.zeros

We must now decide on the seed. I will choose a simple oscillator, known as the beacon, which evolves as follows:

If you are struggling to see how this works, simply count the number of living neighbours for each cell then apply the rules of Life as presented earlier.

In python, we will set the seed like so:

It is worth discussing at this point how we plan on visualising our universe. The easiest solution I have come across is to use matplotlib’s imshow, which outputs a grid of colours corresponding to the value of every entry in an array. Using the binary colourmap, we have: 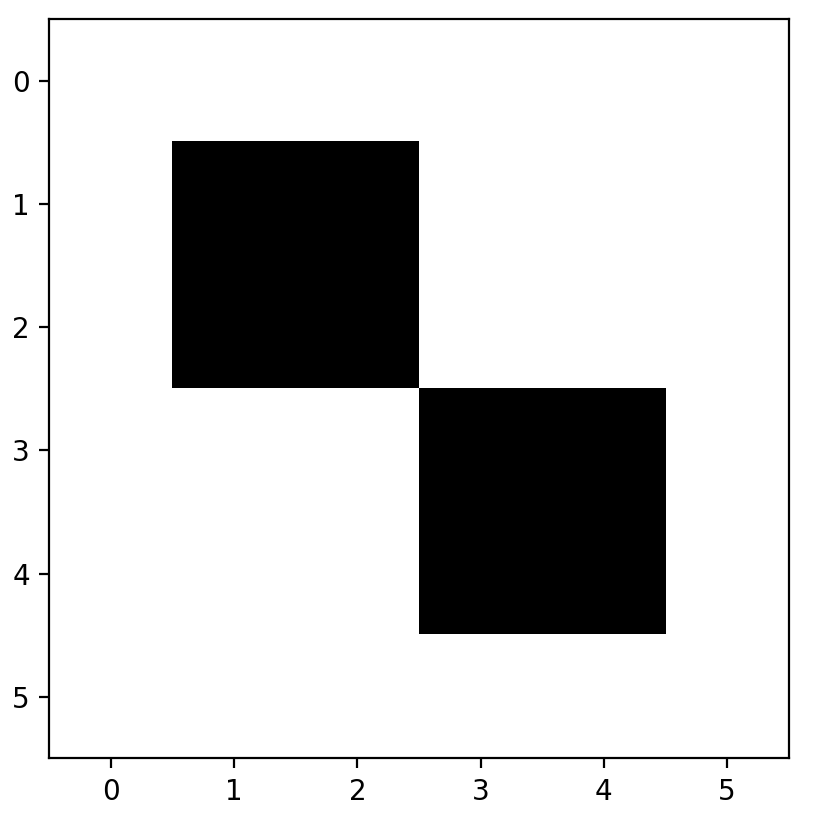 We now need a function which will do the following:

The last point is rather subtle — we cannot update the cell in place, because this will affect the surrounding cells in the same iteration. Instead, we need to compute the survival of every cell based on a snapshot of the current universe, then simultaneously write all of these new cells into our universe. A cheap shortcut is to write the new values into a copy of the universe called new_universe, while leaving universe as a read-only. Then, later on, we can set the universe to be equal to new_universe.

I know that the if-else statements can be simplified drastically, like such:

But it is much more intuitive to keep the logic in its ‘expanded’ form, wherein one can clearly see the rules of Life.

This is a simple matter of applying our survival function to every cell in the universe, then setting universe to be equal to new_universe.

There is no point iterating unless we can visualise the changes. To do so, we can simply use matplotlib’s animation module (see some examples here).

Putting it all together, the output is:

Yes, I changed the colour to purple. Get over it.

Where here to go from here

In principle, we are done. Now it is up to you to experiment with different seeds! But I can’t resist one more demonstration, using the R-pentomino seed: 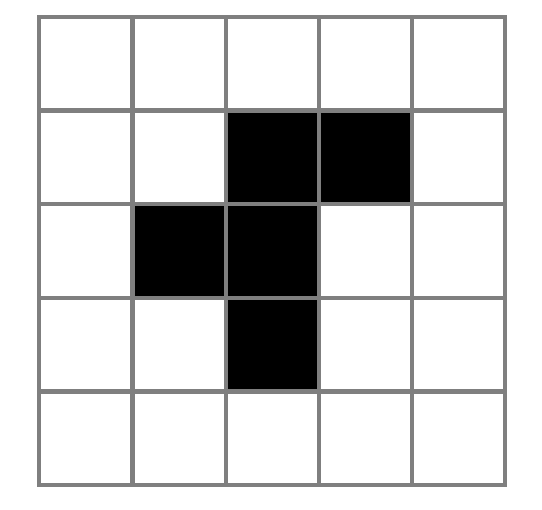 Perhaps you’d expect its behaviour to be vaguely similar to that of the beacon. But the wonderful thing about Life is the dazzling complexity that can result from a simple seed. See for yourself:

Check out my PyGameofLife repository on GitHub, which includes a slightly more professional refactoring with a number of built-in seeds allowing a user to generate gifs from the command line. The R-pentomino animation above can be created with:

Feel free to submit a pull request if you’d like to add more seeds or functionality.