Combinatorial optimisation with a pseudo-genetic algorithm 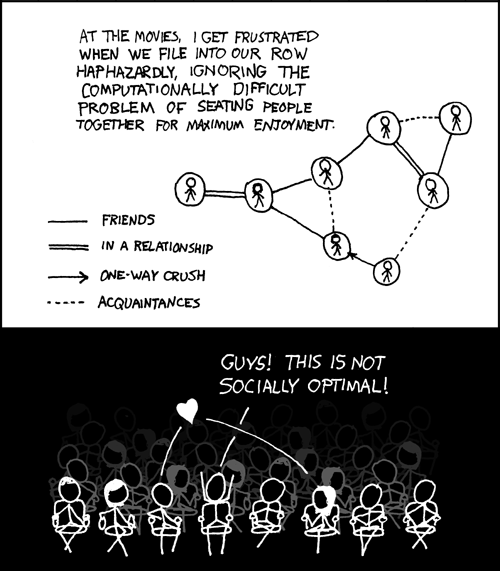 Social groups are remarkably complex affairs, and on many occasions this complexity can lead to awkward situations. Randall Munroe humorously portrays one such example in XKCD #173. This comic naturally begs the question – how do we find the optimal linear seating arrangement for a given social group?

If you’re not a fan of people trying to logically dissect non-mathematical things, now would be a good time to cut your losses (at least you got to see the XKCD comic!). Otherwise, don your cringe-protection glasses and we can move on.

The precise problem here is that the nonlinear ‘social graph’ has to be compressed onto a linear arrangement, which, as the comic points out, is computationally hard. Nevertheless, we will attempt to find a good arrangement (not necessarily the optimal one) by using a genetic algorithm of sorts. But before that, we must firstly quantify the various parameters in this problem.

Edit as of Jan 2020: reading back on some of my old posts, I typically realise that many of my solutions are excessively convoluted or poorly-explained. This post is no exception. One particular highlight is my rediscovery of adjacency matrices!

What does it mean for a seating arrangement to be optimal? I am going to take a disgustingly utilitarian approach, by simply calculating the enjoyment per individual for a certain arrangement then summing over all individuals to find the total enjoyment. The optimal arrangement is then just the one with the highest total enjoyment (duh). Before going further, we must first decide on a way of describing social networks which will allow us to do this analysis.

Following the XKCD comic, each individual be denoted by a circular node. We will consider four types of relationships between individuals: friends, one-way ‘crushes’, romantic relationships, and acquaintances. I’m going to slightly modify the notation of the comic though: 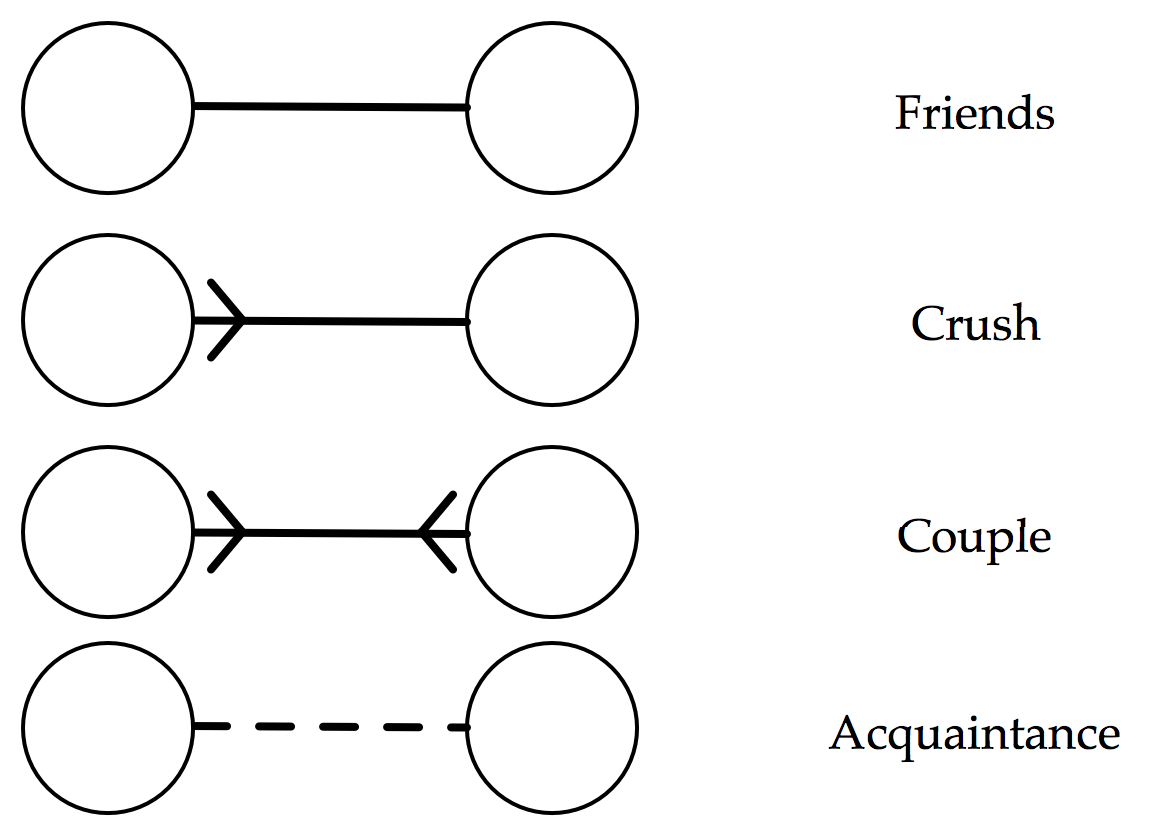 The major advantage of this notation is that it encourages us to only consider the outgoing connections from a particular individual, which will be a big simplification when we come to considering an individual’s enjoyment. But it is far from perfect. For example, this notation implies that a romantic relationship is the same as a mutual crush, i.e. that an individual would get as much enjoyment from sitting next to their crush as they would with their partner.

Proceeding anyway, we assign each type of outgoing arrow a weighting, corresponding to how much enjoyment an individual experiences when sitting next to a person of that relation. Here is one proposed weighting:

Of course, the actual values are quite arbitrary – what matters is their relative ordering. I think it is fair to say that an individual’s seating preferences follow the above list in descending order. That is, given free choice, you would enjoy most to sit next to your crush, and least enjoy sitting next to a stranger. Choosing precise weightings would require you to quantify, for example, exactly how much more you would prefer to sit with a crush than with a friend – good luck with that!

Now that we can describe a social network, let’s try to calculate the total enjoyment for a seating arrangement. We may as well use the network given in the comic. Here it is reproduced with our new notation (labelling each individual with a letter of the alphabet): 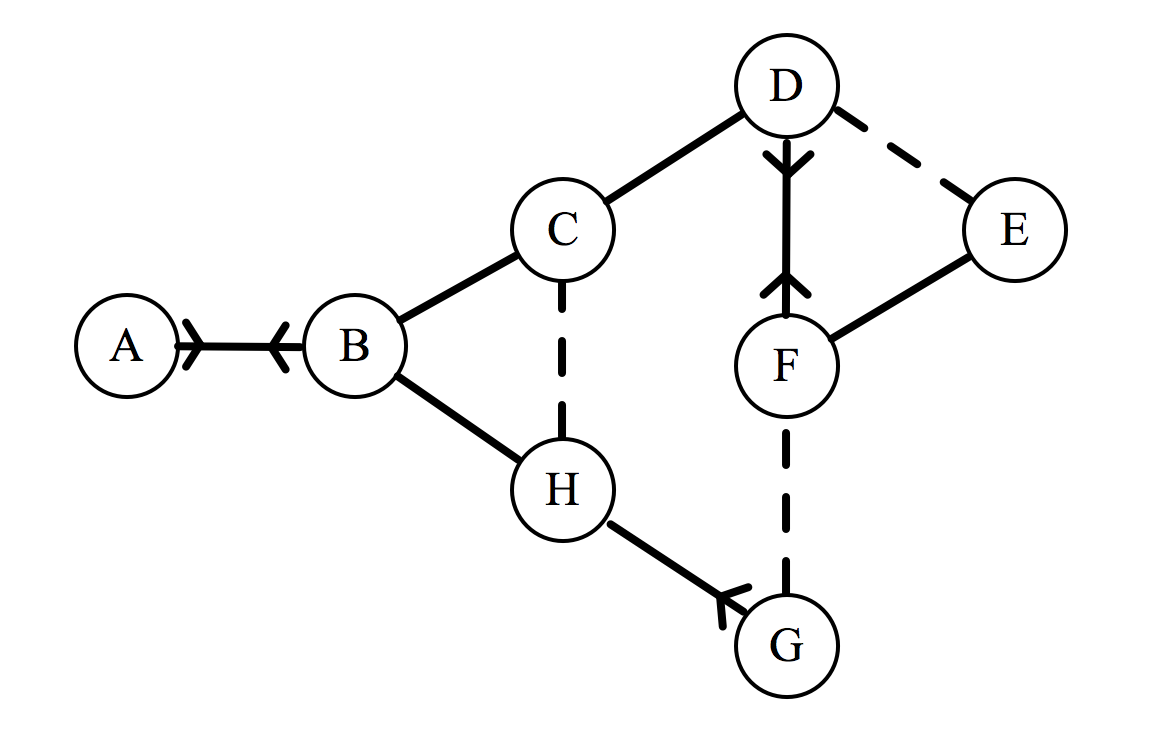 This is easy to do with just one arrangement, but we need a robust way of finding $\epsilon_{\text{total}}$ for any arrangement.

We will define the system as follows:

That is a lot to take in, but hopefully this notation will become clearer with an example. Here is the XKCD network, with the letter labels replaced by numerals. 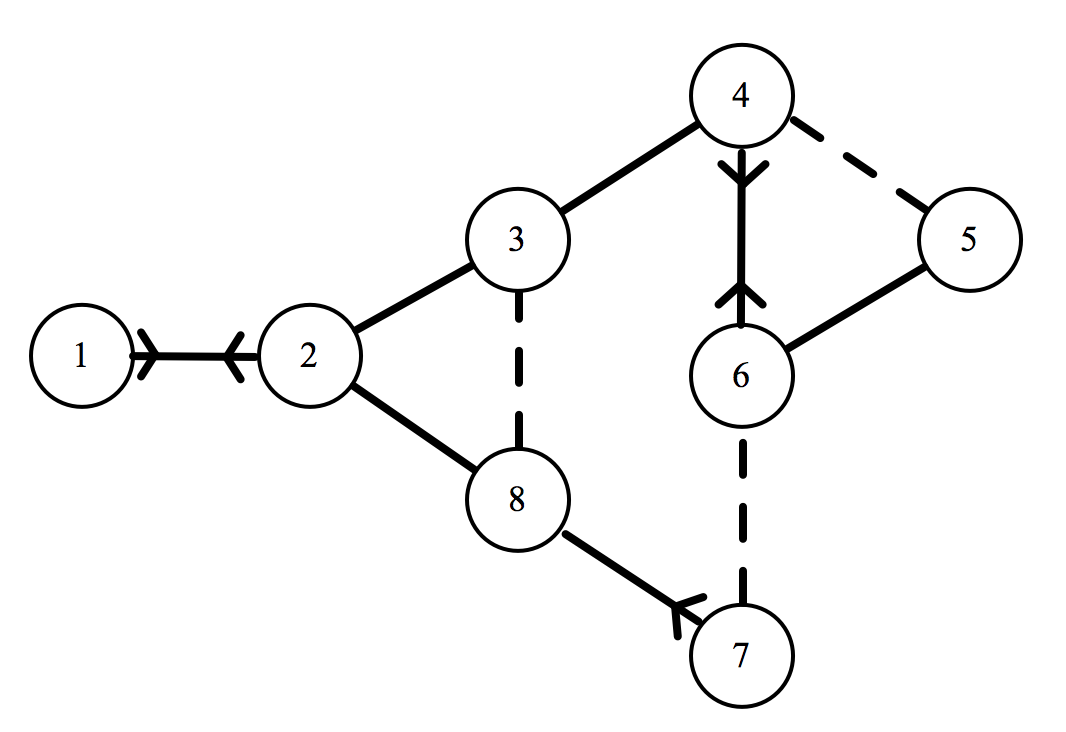 You may notice that I neglected to mention the sixth entry of $x_6$. $[6, 6]$ represents the enjoyment produced for the sixth individual by the sixth individual. I suppose that some people do enjoy being alone, but seeing as we are dealing with a group of friends at a cinema, I will set this entry to zero. That is to say, if $i=m, [i,m] = 0$. In our model, individuals get no enjoyment from sitting next to themselves.

We can write a vector $x_i$ for every individual in our network. After doing this, we do not need the graph any more – our network is fully defined by these n vectors!

The total enjoyment for a general arrangement

We will denote a general linear arrangement of individuals as \(u_1, u_2, u_3, \ldots, u_n\). (earlier we had ABCDEFGH). You may be wondering why I have decided to add yet another set of variables – am I just trying to be novel in my notation? As it happens, there is a very important distinction between the individual’s location $\left(u\right)$ and the label of the individual ($i$). $\mathbf{u_1}$ is not the same as individual 1. $u_1$ could be any of the people in the network – but what matters is that this individual is in the first position of the arrangement. The u terms are a way of representing the order of people in their seats. Strictly speaking, I should therefore be saying things like “the individual at $u_1$”, but I will often just say “the individual $u_1$” or just “$u_1$”. This is an important point, so I’ll give you a concrete example:

corresponds to a seating arrangement 3, 7, 1, 2, 5, 8, 6, 4. Remember, each numeral is the label of a person, so this could alternatively be thought of as CGABEHFD.

In order to calculate $\epsilon_\text{total}$, we need to calculate the enjoyment for each $u$ term then take the sum of all these. Because of our simplification that an individual is only affected by the people immediately to their left or right, a neat trick is to group the arrangement into pairs. So we will think of the arrangement as:

where each pair of parentheses encloses the relationship between two individuals.

If we wanted to find how much individual 4 contributes to the enjoyment of individual 6, we would look in the 4th entry of $x_6$. Likewise, the enjoyment produced in individual $u_1$ by individual $u_2$ can be found by looking in the $u_2$th entry of the vector $x_{u_1}$. This subscript-within-subscript notation is very confusing, which is why we defined an alternative notation, the square-bracket notation wherein $[i, m]$ represents the $m$th row of the vector $x_i$.

Now all we need to do is sum over all the $n-1$ pairs. Therefore:

where $r$ is a dummy variable.

Back to the XKCD network

Let’s calculate the $\epsilon_\text{total}$ of a random arrangement. I’ll choose this with my custom arrangement-randomiser:

In order to calculate $\epsilon_\text{total}$, we just need to apply our formula:

It is worth commenting on the fact that all of the above values come in identical pairs (that is, $[u_r, u_{r+1}] = [u_{r+1}, u_r]$), which is not true generally. However, for this particular network, there is only one asymmetrical relationship, the one-way crush between individuals 7 and 8 – and in our particular arrangement, 7 is not next to 8.

We could have found $\epsilon_\text{total}$ without our vector notation, and simply with arithmetic by looking at the linkages on the graph. However, the process that we have described in this section does not require actually looking at the networks, meaning that we can write code to do it for us.

Now that we can effectively calculate $\epsilon_\text{total}$ for any given arrangement. We are ready to find the optimal arrangement.

A brute force search (i.e, calculating $\epsilon_\text{total}$ for every possible arrangement and returning the maximum), is not feasible due to the computational complexity, which is $\Theta(n!)$. For those not familiar with Big O notation and it’s variants – this is equivalent to saying that it’ll take one hell of a long time.

A genetic algorithm is an optimisation heuristic (shortcut) that mimics Darwinian natural selection.

A brief summary of Darwin’s theory is as follows:

A genetic algorithm follows the same steps, but in computer science terms:

4. Implementing the (pseudo-)genetic algorithm in python

In this section we will write python code to find the optimum arrangement for the XKCD network, though of course we could use it for any other network.

Let us represent our network as a list of lists, where each sublist corresponds to a vector $x_i$.

Creating our population of arrangements is a simple matter of shuffling a list of numbers.

This function will return the following:

Survival of the fittest and reproduction.

Now that we have a function to measure the fitness of an arrangement, we need to find a way to remove the ‘weak’ individuals, leaving only survivors. Then, we need to let these survivors reproduce. But what does this mean in terms of arrangements and etotals? The first part is simple: we will consider an arrangement to be weak if it’s $\epsilon_\text{total}$ is less than the median $\epsilon_\text{total}$ (which I think is reasonable).

However, once we have the survivors, how can we get them to ‘reproduce’ to form new arrangements? The important aspect of reproduction, when it comes to genetic algorithms, is that the offspring receives features from both parents (who are themselves ‘fit’) – there is a crossover of genetic material. However, the individuals of our population are arrangements we cannot just take the first half of one and combine it with the second half of another.

I thought for a long time about this, and came up with a rather unsatisfactory solution. Instead of mixing genetics from two parents, I decided to define a child as half of a parent’s arrangement, plus the shuffle of the other half.

Yes, I know. It’s hardly reproduction – more like a glorified form of mutation, but this is why I have titled the post as a pseudo-genetic algorithm. If anyone can come up with a better idea for what reproduction could mean in the context of seating arrangements, I’m all ears.

Mutations are random changes to the genetic material. With regard to seating arrangements, I will consider a mutation to be the swapping of any two members within the arrangement. A required parameter is the mutation rate, which encodes how often mutations should occur. A value of 0.05 (which is what we shall use) means that, on average, 5 in every 100 arrangements will contain a swap.

Evolution requires many generations to happen. In the context of our algorithm, this just means that we need to repeat the process of survival, crossover, and mutation over and over again.

That being said, we also want to get a feel for how our algorithm is doing, so I will write a progress function to do that. The idea is that at every iteration, we will run progress(generation), which will log the best $\epsilon_\text{total}$ of that generation, and the corresponding arrangement.

Application to the XKCD network

Now that we have everything ready, we are ready to find the optimal arrangement for the XKCD network.

One example of running this gave the output: 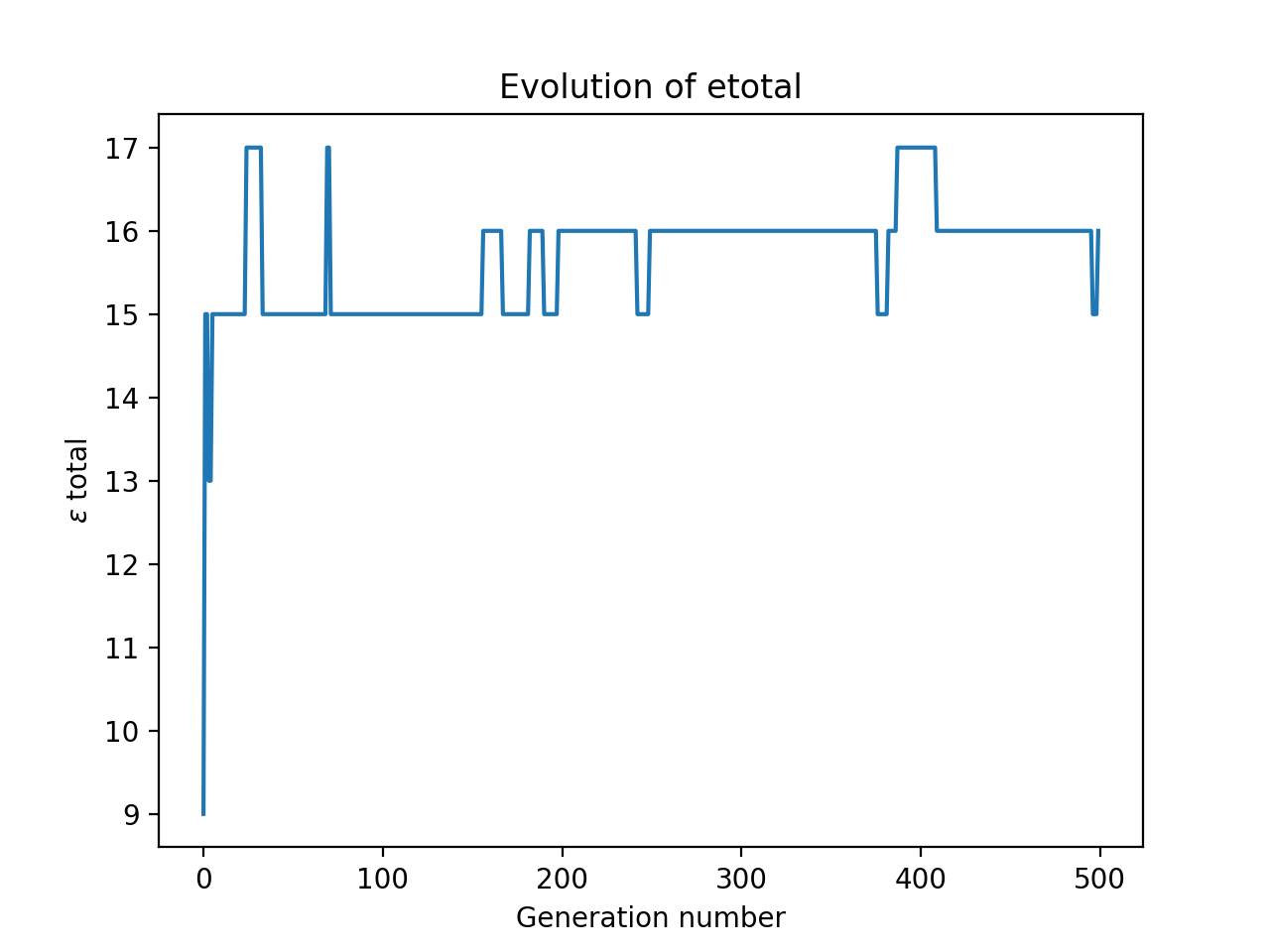 I ran this a number of times on my system, and plotted all the results at once. 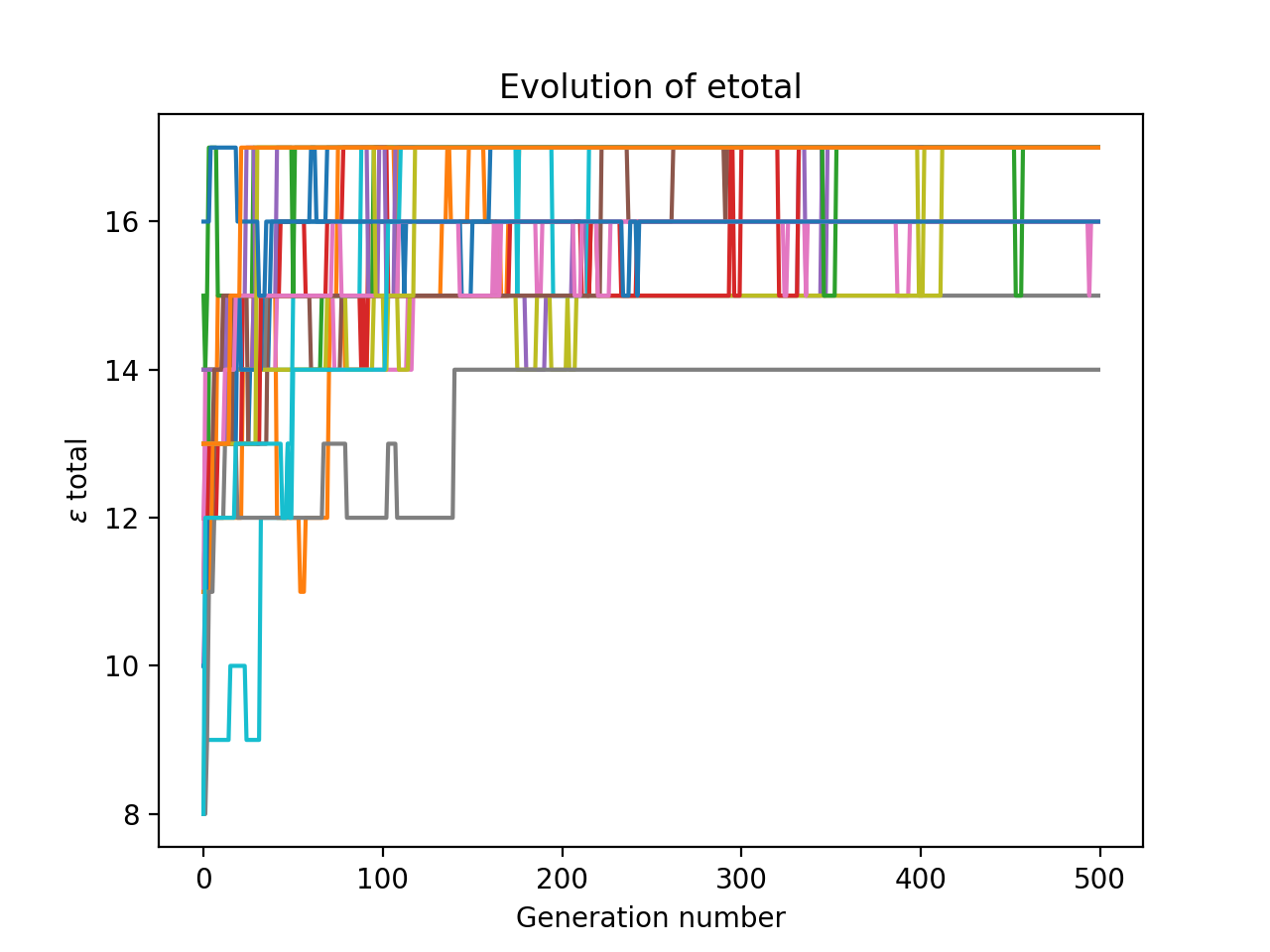 Notice how it is quite volatile: many generations have a lower maximum $\epsilon_\text{total}$ than their parent’s generation. This is probably because our reproduction step is really just another form of mutation. However, because our code keeps track of best arrangement so far, all that matters is that our optimisation algorithm hits the maximum – it doesn’t have to stay there.

So there you have it. Using pseudo genetic algorithm, we have managed to find good linear seating arrangements given a friendship network.

This problem of optimising seating arrangements actually belongs to the much broader (and actively researched) field of combinatorial optimisation – so it is a cousin of the famous Travelling Salesman problem, as we could interpret our investigation as trying to find the optimal route through the social network. Perhaps we could initialise many salesmen and let them evolve! Food for thought.

I hope you enjoyed what turned out to be a rather long article. All the code is on my GitHub, feel free to fork it and try out your own networks.